Japan’ Assistance for Division of Fire and Rescue through Enhancing Disaster and Climate Resilience Project in Palau with UNDP: the Fourth Handover Ceremony Took Place 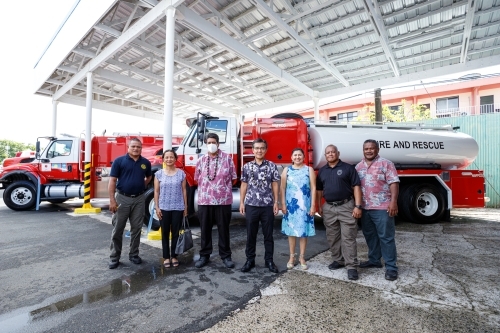 On May 18, 2021, Division of Fire and Rescue of Palau held the fourth official handover ceremony for Enhancing Disaster and Climate Resilience Project in Palau. Japan initiated this project, funding 7.5 million US dollars, coordinating with the United Nations Development Program (UNDP) to improve the country’s resilience to natural disasters and climate change impact.

The ceremony was attended by His Excellency Surangel Whipps Jr., President of Palau, His Excellency KARASAWA Akira, Ambassador of Japan, Ms. Aleyda Valdes, UNDP Country Project Coordinator Palau, as well as other key officials of the Government of Palau.

The ceremony presented two fire trucks including one 3,000-gallon tanker and the completion of roofing extension of the fire station, worth about 793 thousand US dollars in total.

At the ceremony, Ambassador Karasawa stated that it is important to prepare for disasters in advance since natural disasters could happen anytime quite unexpectedly, referring to the case of the recent Typhoon Surigae, and emphasized that this assistance would definitely enhance Palau’s preparedness and capability to deal with disasters.

President Whipps remarked on the importance of this assistance, citing cases when the fire trucks would be utilized. He then expressed his appreciation towards Japan and UNDP for improving Palau’s resilience and safety to protect people’s lives.

We hope that the Division of Fire and Rescue will make good use of the fire trucks for the safety of the people in Palau for a long period of time.