Mr. Fuji's comment on his award 'the Order of the Rising Sun, Silver Rays ' 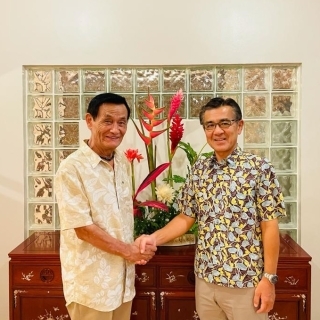 Mr. and Mrs. Fuji and Ambassador and Mrs. Karasawa
On April 30, Ambassador Karasawa invited Mr. and Mrs. Fuji to his residence and conveyed the congratulatory message from Mr. MOTEGI Toshimitsu, Minister for Foreign Affairs of Japan, to Mr. Fuji, as the Government of Japan announced Mr. Fuji was awarded the Order of the Rising Sun, Silver Rays, for his service on the support for the Japanese residents in Palau and the development of the relationship between Japan and Palau. Of all the awards given, this is the very first Order to a Japanese resident in Palau.

Mr. Fuji commented on his award as follows. "The Government of Japan has announced that I, Katsuo Fuji, is the recipient of the Order of the Rising Sun, Silver Rays in the Spring Imperial Decoration of 3rd year of Reiwa. This award is given to the recognition of 'the achievements of Japanese Language School of Palau as the Principal and the development of Japan-Palau relationship' for many years."

“First, I would like to express my sincere gratitude and excitement for receiving the award. I would like to honor this award with everyone involved in the Japanese Language School of Palau and everyone at my work place including the Governor of Koror State Government and his staff, especially all staff of the Solid Waste Management Office. I am delighted to think that 'Office Friends' are also awarded with me."

“All my activities mentioned in the award are still ongoing, so this award will be a great encouragement for further progress. I would like to happily accept the award with understanding that I am highly expected to promote these developments even more.”