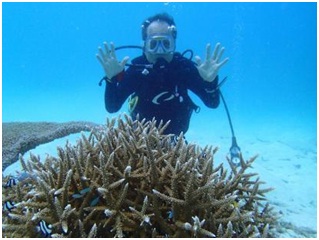 Palau has the world’s first nuclear-free constitution. It banned all commercial shark fishing within its EEZ waters. This sanctuary protects about 600,000 square kilometers of ocean, a similar size to France. Thus , Palau is at the forefront of many aspects.

I arrived here in Palau at the end of March 2013. I had known that it had a small population of about 20,000. The places smaller than Palau are just Nauru, Niue and Vatican City in the UN member states. Palau is located in the far west in Micronesia neighboring with the Philippines.

Japanese influence is seen in some aspects. Many people are of Japanese blood. They take the names of Japanese, such as Mr. Kuniwo Nakamura who is the fourth president of Palau when it became independent,and Mr. Yoshitaka Adachi, the governor of Koror State. Palau is an outstanding pro-Japanese group. It is not only because of the Japanese names but also of the Palauan words adopted from the Japanese language. “Skarenauos” means the word to drink beer for relaxing. “Aji Daiziob” means delicious, and so on and so forth.

Palau has a lot of familiar Japanese food as well. In addition, there are very few crimes. The number of Japanese tourists per year is more than twice of the Palauan population. The total tourists in Palau count over 100,000 every year. It reached 140,000 last year (2014). Palau is really a big touristic country. English is one of the official languages and US dollar is used. It is also attractive to Japanese tourists.

The capital is Melekeok which has about 300 people. I am sure it is the smallest capital in the world. It was moved from Koror in 2006. But the state of Koror still plays the practical role of a capital city.

I work with the Building and Zoning Department in Koror State Government which is the largest among Palau’s 16 states. My assignment is to help in the revision of the City Master Plan which was done by the support of a Hawaiian consultant nearly 40 years ago. The mission has been ongoing for more than 6 years, by the 3 experienced specialists of town planning (JICA senior volunteers). The goal can’t yet be seen. That is my big concern. The basic data regarding the Master Plan is given every 5 years. The last census data is from 2005 and there has been no updated version.

From a different point of view, so-called “Island Time” is comfortable for me. But I want to finish quickly and to have the plan revised every five years. This is my objective for the feasibility of the plan. I am pleased that my experience as a dedicated architect and engineer in a local city which I am proud of, is being very useful. 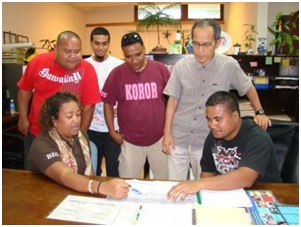 (At my office with my colleagues) 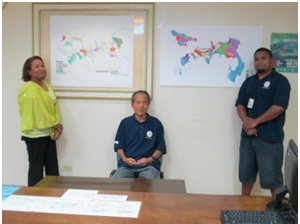 (In front of land use plan maps From left:
Maggy, myself, Caleb )

The organization of the administration is totally different to me. There are states under the national government. Under the state there are hamlets which are very small communities.

The City Master Plan should be the basic guideline for planning for 20 years ahead. The purpose is to clarify the present issues and take effective measures to resolve them in future. I insist to set a goal finishing quickly instead of taking too much time. To meet this goal, we should focus on the content more than quantity in detail. In this situation, we are making the survey of the existing buildings. Then, we will create efficient land use map. This strategy is what my predecessor had shown us. I myself am making the map by Auto-Cad which will enable the proper land use planning as well as area, zoning boundary and coloring. I hope it will connect to the next step.

In the end I will enjoy “Pristine Paradise Palau” for the rest of my term.